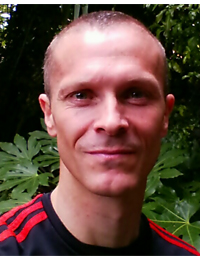 Simon is perhaps one of the most experienced and highly qualified fitness professionals in London. He graduated with a degree in Physical Education from Manchester University in 1988 and a Masters Degree in Sport & Exercise Science from Sheffield University in 1991. He has also obtained the Strength and Conditioning Specialist certification from the National Strength and Conditioning Association (USA) and the Health and Fitness Instructor certification from the ACSM (American College of Sports Medicine)

In 1992 Simon began working in the gym at Lambton Place Health Club (now Body Works West) in Notting Hill and in 1999 became the clubs Fitness Manager. He continued in this role at the club until the summer of 2014.

Simon is an accomplished sportsman with a wide range of experience. He played football for his county (Middlesex) while at school and for Hanwell Town FC as a youth and young man. While at university he continued his football career but also played basketball and a plethora of other sports including tennis, badminton, boxing, cricket and karate. After university Simon took up running and triathlon. In triathlon he has competed at every distance from sprint to Ironman and in 2006 he finished 23rd in the UK half ironman (70.3) championships against over 400 of his contemporaries. In running he has competed in road races from 5k upwards and has run 10 Marathons including 5 London Marathons.

Since the very beginning of his career over 25 years ago Simon has taught classes, not through necessity but through enjoyment and continues to do so today with no sign of stopping.