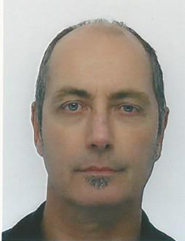 From leaving school until the age of 34 I worked in the construction industry. Due to a serious leg fracture in 1986 I changed careers and became interested in healing. From 1988-1994 I studied Osteopathy and Naturopathy at the College of Osteopaths in London. Unfortunately a year before I finished I was diagnosed with Leukemia. After the treatment, i finished my course and acquired a diploma in Osteopathy & Naturopathy in 1995.

In 1996 the leukemia returned and as a result I stopped work and traveled to India and started my Yoga journey. After I had my Bone Marrow Transplant I continued my studies and went on to do my teachers training course with Sivanda Yoga in Val Morin Canada in 2000.

I have worked as a Yoga teacher since.

I became so enamored with the power of yoga to heal that I never returned to working as an Osteopath again. I undertook the Advanced Yoga teachers training course in 2012 in Kerala, India.

I am also a musician and a novel writer - as yet unpublished. I'm waiting to hear from publishers regarding my latest work.

I continued to practice yoga daily and am pretty certain that it is this has helped me to overcome the effects of chemotherapy and other sundry side effects of cancer treatment.